Nationwide Platforms says it has become the first access hire company to develop and introduce a secondary guarding system designed to prevent a trapping or crushing incident before a collision can occur. 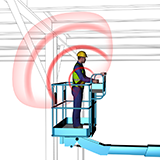 According to the company, SkySiren PCS (Pre-Crush Sensing) represents a major step forward in powered access safety. It automatically stops a mobile elevating working platform (MEWP) boom before the operator comes into collision with an object that could lead to a trap or crush incident.

The system is the first in the UK to offer a double protection barrier against trapping and crushing incidents, creating a new level of guarding, which its designers have called ‘Intelligent Secondary Guarding'.

As well as preventing trap and crush collisions before they can happen, the system has other key benefits. It warns operators about potential hazards, so they are more alert in high risk areas.

Trapping and crushing incidents remain one of the major causes of serious injuries and fatalities involving MEWPs.

Nationwide Platforms was the first to respond to industry concerns with the launch of the original SkySiren, in 2011. Its pressure sensor bar, located across the MEWP controls, stops the machine if an operator's body is pushed against it during a potential entrapment incident.

"SkySiren PCS is unique in that it provides two levels of protection. The PCS system is designed to prevent a trapping and crushing incident happening in the first place. SkySiren then provides a proven safety back-up.

"The introduction of SkySiren PCS, with its double protection innovation, reflects Nationwide Platforms' leadership in developing new technologies that deliver the best health and safety protection for people working at height."

The PCS system has eight ultrasonic sensors located behind and in front of the operator on the boom platform. These generate high frequency sound waves around the MEWP operator.

When the platform moves to within a defined distance of an object, the sensors detect the sound waves that are reflected back from it. This triggers a signal to stop the MEWP.

To start the machine again, and move towards the working position, the operator simply resets the safety foot pedal. While moving within the ‘sensing zone' around the object, the operator is continuously alerted by a flashing red light, and a personal alarm.

If, subsequently, the platform is operated in a way that risks entrapment, the SkySiren pressure sensor bar located across the control panel continues to protect the operator by stopping the MEWP. It then raises the alarm with a strobe light and a klaxon.

SkySiren PCS incorporates the latest version of SkySiren, which for the first time can be integrated with the SkySentry authorised access and data reporting system. This gives MEWP managers and operators new opportunities to respond effectively to risks, and target measures to improve processes and training.