Nationwide Platforms, the powered access specialist, has more than tripled its fleet of tracked boom lifts after taking delivery of a further 64 machines. 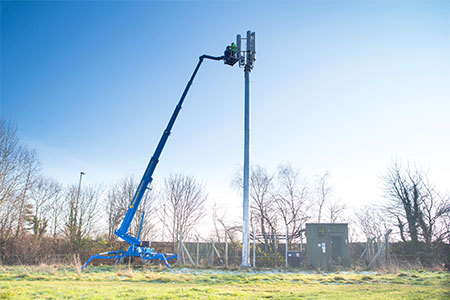 Comprised of 56 Hinowa and eight large Teupen tracked boom lifts, the investment is said to ensure its customers have unrivalled access to one of the largest and youngest fleets of tracked boom lifts throughout the UK.

Available for hire with either an operator or on a self-operated basis, Nationwide Platforms will now be able to provide to customers throughout the UK, with 100 tracked boom lifts based in Luton, Warrington, Edinburgh and Bristol.

The new Hinowa Performance IIIS tracked boom lifts, which join a further 36 Hinowa lifts purchased in 2016, offer working heights of 15.4, 17, 20 and 25.7 metres. Available with either a diesel engine or Lithium-Ion battery pack, features include 230kg unrestricted platform capacities, compact dimensions and the ability to pass through standard single and double doorways.

Described as considerably lighter than conventional access platforms with similar working heights, low ground bearing pressures and non-marking tracks make them well suited to working inside enclosed spaces as well as on sensitive flooring such as in churches, museums and shopping centres. They are also equally equipped to traverse rough or soft terrain, making them suitable for arborist, telecoms or utility companies which might need to access remote areas.