Draka is a brand of the Prysmian Group and its facility in Aberdeen supplies oil rigs and drilling platforms with a range of power, telecommunications, instrumentation and control cabling, and specialises in providing custom cut lengths from a little as a few metres up to 20,000m reels. 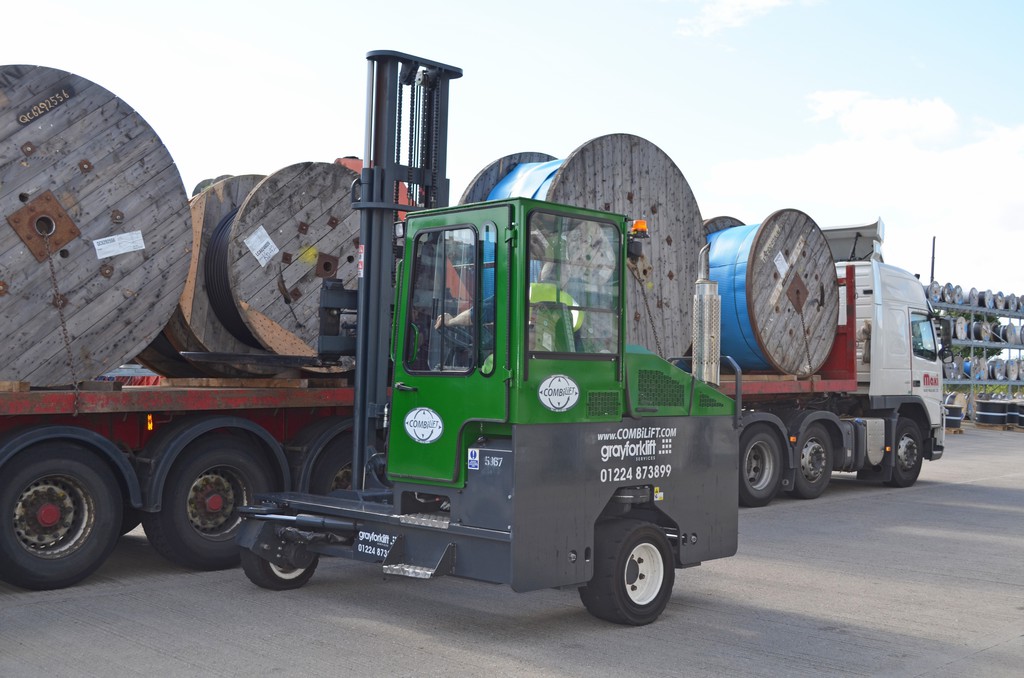 By replacing its old counterbalance forklift and reach truck with a 4-way Combilift and an articulated Aisle-Master forklift Draka has been able to double storage capacity in its premises and avoid the need for costly and disruptive relocation. Business Unit Manager Graham Ross: "We were nearing saturation point and had considered moving, but after talking to Nick McCrea at Gray Forklift Services we realised that there was a far more convenient option of staying put if we re-evaluated the performance of our materials handling equipment.”

Combilift design engineers at the HQ in Ireland provided warehouse layouts illustrating the space savings that could be achieved and proved that the ability of the two trucks to work both inside and out would also be advantageous. This offers a much higher level of versatility compared to the old system where each forklift had a very defined and limited area of operation: counterbalance for the yard and reach truck inside.

The Aisle-Master works in much tighter aisles than reach trucks and enabled aisle widths to be reduced and extra storage bays added to accommodate over 700 reels – double the previous number. The increased storage density in the warehouse has also allowed more products to be kept undercover, providing better security for the most valuable cables. Aisle-Master was also a much more cost effective option than going down the traditional VNA route which requires guidance systems and very flat floors.

The reels that are offloaded, stored and despatched from Draka’s facility differ greatly in size and weight – from around 100kg up to 3t. The combination of the 2.5t electric Aisle-Master and the heavier duty 4-way Combilift C5000XL diesel model ensures that all products can be handled easily and quickly, in the yard and within the racking. The Combilift was supplied with a slightly longer than standard platform (1500mm) to accord to the sizes of reels and its extended load centre enables the heaviest drums to be lifted securely to the top beam height of 5.6m when it works in the wider aisle by the doorway. "A counterbalance truck capable of doing this would have to have a good 6 or 7t capacity,” said Graham, "and the room needed for manoevering would have a severe impact on space availability.”


Operators also benefit from a number of features which reduce manual strain and make the working environment more comfortable. The Aisle-Master has hydraulically operated fork positioners that can be controlled from within the cab to easily adjust the fork widths to the varying diameters the reels. The enclosed cab on the Combilift also protects them from the elements – which can be harsh indeed in Aberdeen. In addition its multi-directional capability allows it to get very close to the cutting machine. "Our operators have enough manual handling to do during the custom cutting operation, so anything we can do to reduce this is an advantage,” said Graham.

Both trucks are on a contract hire agreement with Gray Forklift Services, with whom Draka have had a 10 year relationship. "We value the advice and service that Grays have given us,” said Graham. "In this instance they have enabled us to remain on this site whilst improving operational efficiency and creating more storage space. Reconfiguring and installing the new racking took just a few days so disruption was kept to a minimum. The new forklifts have proved to be reliable workhorses that do just what we need, all day long.”