Schmersal India Private Limited, a subsidiary of the Schmersal Group, celebrates 10 years of existence this year. 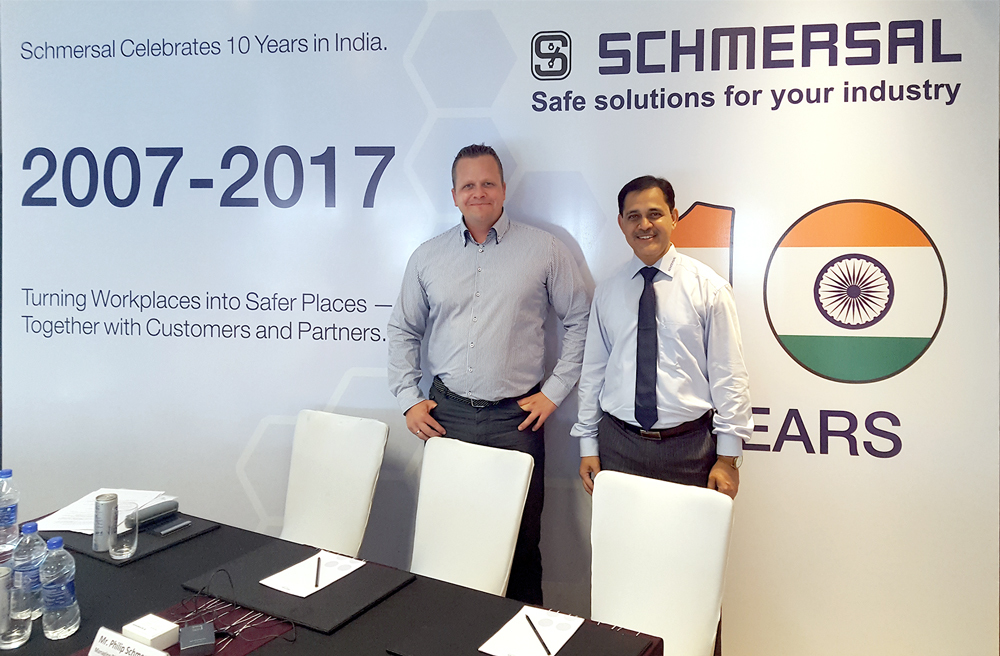 Some 200 guests from politics and business joined the celebrations on 2 June 2017 in Ranjangaon, including German Consul General Dr. Jürgen Morhard.

The company was initially founded in 2007 as a sales organisation in order to participate in the growing Indian market for machine safety. In 2012, the cornerstone for a production factory was laid in Ranjangaon near Pune in the state of Maharashtra. The Schmersal Group invested about 8 million euros (approx. 580 million Indian rupees) in the construction of the new factory, which started production in July 2013. “The constant rise in demand for Schmersal products was the main factor behind the decision to invest in our own factory, especially as it became apparent that the Indian market offers massive potential for the years to come,” reports Sagar Bhosale, managing director of the Indian subsidiary. “To date, Schmersal is the only company producing safety switches directly in India.”

The Schmersal factory in Ranjangaon produces safety switches and lift switchgear on almost 4,000 m² of production and storage space. Initially, production was destined primarily for the Indian market. Parallel to this, Schmersal India Pvt. Ltd was expanding its sales activities in India - both by opening new sales offices in Delhi, Mumbai and Chennai and by expanding the network of dealers. “Our customers currently include many international names in industries such as food and beverages, steel, mining, metals, automobile, alternative energy, plastic, cement, power, the lift industry etc. So today, we are delivering our products to the whole of SAARC countries (South Asian Association for Regional Cooperation),” explains Sagar Bhosale. In 2016, Schmersal India Pvt. Ltd. achieved a turnover of 4,4 million euros (approx. 320 million Indian rupees).  A major milestone was achieved in April 2017: the Ranjangaon factory produced the millionth safety switch since it became operational.

Schmersal India Pvt. Ltd. now employs around 70 employees, including a mechanics apprentice. In the near future, the plan is to increase this number to 80 to 85 employees, as a production system is to be relocated from the German factory in Wettenberg to India. The number of trainees is also set to rise. In 2015, Schmersal India Pvt. Ltd, in conjunction with the Indian German Chamber of Commerce (IGCC), established a dual training project based on German models which is due to finish this autumn. To date, two previous trainees have been taken on as regular production employees.

Schmersal India Pvt. Ltd. has a promising future ahead of it: “We are expecting further growth in production and employment,” explains Sagar Bhosale. “After all, the increasing awareness of safety in the industry leads to a higher demand for safety solutions and services. Increasing levels of disposable income and the urbanisation will boost the demand for products of the food and packaging industry and the pharmaceuticals industry and thus will further increase the demand for safety technology from Schmersal.”