20th May 2013: A study by the Institute of Economic Affairs (IEA) has found that retirement has a negative impact on both mental and physical health over time. 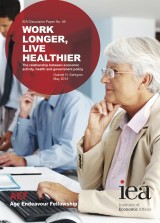 Although initially there may be a small boost in health immediately after retirement, research from the think tank found that in the medium to long-term retirement causes a drastic decline in health.

As a result, the report concludes that for health and economical reasons, the government should pursue policies that remove barriers to working longer.

'Work Longer, Live Healthier: The relationship between economic activity, health and government policy', published in conjunction with the charity the Age Endeavour also suggests that:

Philip Booth, editorial and programme director at the Institute of Economic Affairs, said: "Over several decades, governments have failed to deal with the ‘demographic time bomb’. There is now general agreement that state pension ages should be raised. The government should take firmer action here and also deregulate labour markets. Working longer will not only be an economic necessity, it also helps people to live healthier lives.”

Edward Datnow, chairman of the Age Endeavour Fellowship, said: "There should be no 'normal' retirement age in future. More employers need to consider how they will capitalise on Britain's untapped grey potential and those seeking to retire should think very hard about whether it is their best option."