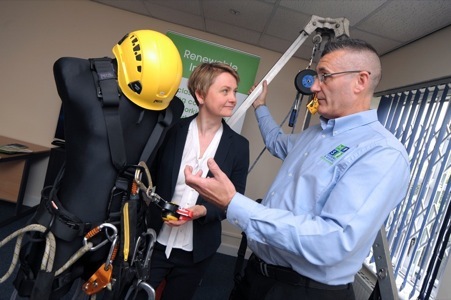 Despite the last deep coal mine closing at Kellingley in December last year, MRS Training & Rescue aims to grow annual turnover from £11m to £20m by diversifying its services.

Its new Yorkshire base, at Knottingley, was officially opened by Normanton, Pontefract and Castleford MP Yvette Cooper on 27th May, and takes the number of UK training facilities to seven. It is conveniently located near the A1 and M62 motorways.

The new base will play a key role in the company's expansion plans, and offers improved facilities, including a self-contained confined space training chamber, built into the fabric of the building with 70m of crawl space and internal cameras for recording all training, to prepare and train anyone who works in confined spaces.

MRS Yorkshire operations manager Billy Gundry said: "Our new centre has five training rooms where we will offer a full range of health and safety training courses including First Aid, Safe Entry into Confined Spaces, Fire Fighting, IOSH and NEBOSH courses to name a few. We particularly target all aspects of confined space training, especially the provision of rescue cover for the high risk categorised work."