Before A-Safe, barriers came almost entirely from the ‘rigid lump’ school of engineering. Facility procurement managers with a pressing need to guide traffic, or protect equipment, or segregate pedestrians from workplace vehicles would more than likely take a trip to their local metal fabricators and ask them to ‘come up with something’ to address their problem. 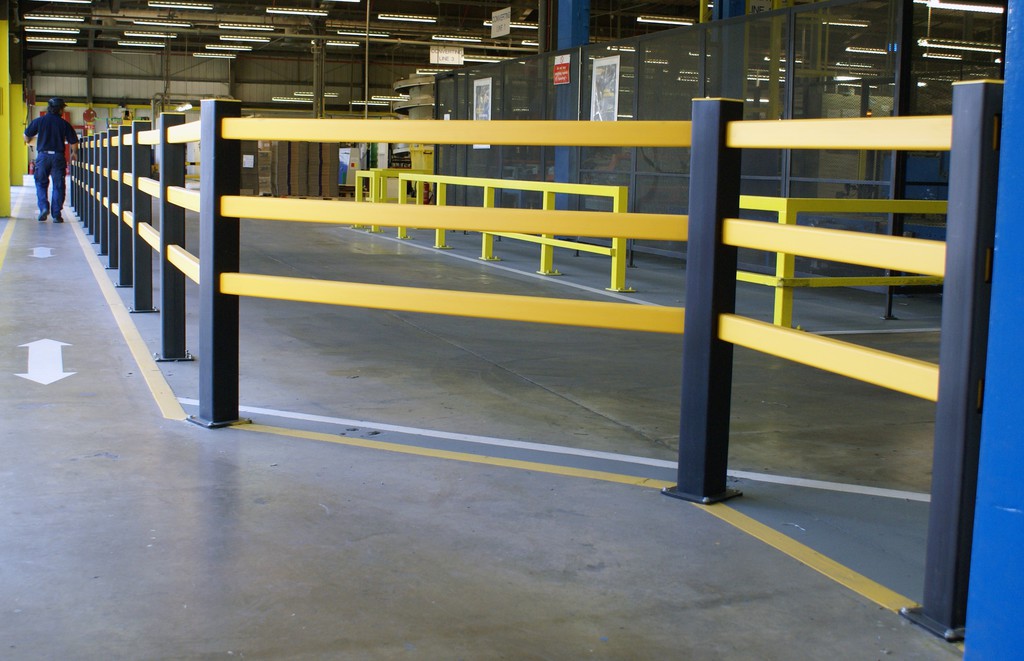 Before A-Safe, barriers came almost entirely from the ‘rigid lump’ school of engineering. Facility procurement managers with a pressing need to guide traffic, or protect equipment, or segregate pedestrians from workplace vehicles would more than likely take a trip to their local metal fabricators and ask them to ‘come up with something’ to address their problem.

In return they’d be presented with a lump of metal and bolts that somehow had to be attached to the floor and then hope that it would be fit for purpose. The problem, of course, was that usually it was not

Health care giant Kimberly-Clark has always had a proactive attitude to health & safety and protecting its massive workforce across the globe is a priority. One site, in Flint, north Wales, was experiencing persistent problems with its heavy duty forklift trucks impacting a particular section of steel barrier. Time and again – almost on a weekly basis – the company was forced to replace this same barrier, incurring large costs over a sustained period.

The problem was more complicated than the barrier not being fit for purpose, however. First, consider basic physics. When a heavy moving object (in this case, a forklift truck) comes into contact with a heavy rigid lump (in this case, a steel barrier) those collision forces need to travel somewhere (in this case, straight down into the steel barrier’s fixtures and fittings, ripping up the concrete floor and uprooting the barrier). Worse, the barrier itself would collapse and need replacing and damage to the forklift itself would be inevitable.

What was needed in order to deal with these problems was a material that was able to absorb, control and dissipate the impacts. As well as this, serious consideration had to be given to the potential energy carried by the forklift, the angle of impacts the vehicle was making on the barrier and the actual height of impact. Only after these factors were properly understood could a barrier be implemented that was fit for purpose.

Enter A-Safe and its scientifically-developed collection of plastic (a patented blend of polyolefins and rubbers) barriers. Kimberly Clark’s safety technician at its Flint site, Stewart Leary, said: "We were approached by A-Safe and I have to admit we were extremely sceptical, but we were willing to offer them a trial.”

Stewart was so sceptical that he made a small £10 wager with an  A-Safe director that, following the new barrier’s installation, it would be ‘ripped up by the forklift in a week’. "We didn’t make A-Safe’s life easy, providing a trial section in a high traffic area," he added. "The gantry that we wanted protecting was a problem area and constantly being damaged by forklift trucks. This was a very vulnerable area and I don’t think anyone believed that A-Safe would stand up to the test or fare any better than the system we had in place previously.”

Nevertheless, when A-Safe revisited the Flint site some five months later, the barrier was still intact - battered and bruised, but still functioning. The cost savings for Kimberly-Clark were immediately obvious.

"It more than did the job,” noted Stewart, "and was the catalyst to review the site and start replacing all steel barriers with A-Safe ones.”

As word spread, health & safety chiefs from Kimberly-Clark Head Office in America saw the barriers in-situ and set about recommending A-Safe as the approved barrier supplier across its sites going forward, with similar results being achieved in all areas.

Miguel said: "A-Safe has proved the most cost-efficient solution for our safety barriers – however, this is just a bonus, as the most essential point is that they provide the highest standard of safety so that our team feel much safer in their working environment. The highly visible yellow barriers have a smart, attractive appearance and have proved to have excellent durability.”

The system has also reached across the Atlantic with Kimberly-Clark sites across America having installed the barriers, including Everett Mill in Washington. Scott Basom, facilities engineer at the Mill had seen A-Safe traffic barriers used at other parts of Everett Mill and decided to introduce A-Safe to the areas he had responsibility for.

"A-Safe is easy to use and install and it looks pretty nice in the warehouse too. Safety is obviously a top priority and with over 1000 employees on-site we need to eliminate risk at all levels. Metal bollards have to be welded to be repaired and this in turn poses a fire danger, so A-Safe automatically negates this. Due to the resilience of the material and its ability to deflect and bend under loads, damage to the driver or pedestrian is reduced as is the need for constant repair.”