As chief executive Teresa Budworth gets closer to her retirement from NEBOSH, HSM managing editor Mark Sennett finds out about her career in the health and safety industry and what her plans are for the future. 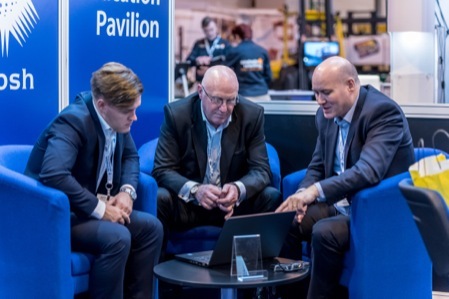 How long have you been with NEBOSH?

I started in November 2004 and when I leave at the end of September I will have been there 13 years and 10 months, which as a matter of coincidence it is exactly the same amount of time I was in my previous role. However, that's when I actually became an employee of NEBOSH but my involvement with NEBOSH goes way back before that.

Back in the late 80s I was working for RoSPA as a consultant, so I developed RoSPA's very first NEBOSH national general certificate training programme, I delivered it and was their main tutor. Then I became a NEBOSH examiner from the December 1990 series of Diploma exams.

A few years later I got a contract as a consultant to work on redrafting the diploma syllabus, so that took up a chunk of 1995 and 1996. Then I was a principal examiner for NEBOSH from 97 and a non-executive director from 2003, so I go further back with NEBOSH. Another weird synchronicity is the week I started my career in health and safety, which I started off by doing a BSc at Aston with Professor Richard Booth, who was the head of department, was the same week that Professor Booth set up NEBOSH. This was September 1979.

My previous role was training and consultancy manager with what became Aviva Risk Management Solutions, which was a NEBOSH accredited course provider.

Why is now the time that you have decided to step down?

There are a variety of reasons that now is the time. I have done this for a long time and I want to see what is coming next in my life.

I am looking forward to enjoying some things outside of my day job as well. I became the chair of the Chief Fire Officers Association at the end of last year, so that is good.  I might consider another non-executive position, but only if it is something that I am really interested in. I am not going to do anything just for the sake of it.

What are you planning to do next?

I made a decision when I was 18 that I was going to go to university rather than going to art school, so the last few years I have been picking up on the art thing as well, so I want to spend more time painting.

I wrote a book a little while ago, and my co-author on that is talking about writing another book together, so all those things take time.

Going back to NEBOSH, how has the business changed from what you inherited?

It is unrecognisable. When I started, I think I was staff member number 27, and there are 115 people here now, so we have grown enormously. We have moved buildings. We were in a different building when I started, then due to growth we came to our current building in 2006 and we are looking to move again when the right place comes up.

One of the really important things about NEBOSH as a place to work is that employees can work around their other responsibilities outside of work, so although we have 115 heads, our full time equivalent is quite a lot less than that. The new building needs to be close to here to accommodate those working shorter hours. If we move 20 minutes down the road then it has a huge impact on the staff, and it is about being able to retain the amazingly great staff that we have, so that is an important factor.

In terms of changes, less than 5% of what we did was outside of the UK, and now it around 70%. And that is not because  the UK market has declined, as it has grown as well. We used to have all of the logistics happening from here, but we don't anymore. I made a decision about seven years ago that we were going to work with a security printer, so that changed the way we worked. Now it is all online registration for exams. It's a data file that goes to a security printer, and they've got the resources to invest in state-of-the-art printing equipment, so they do it more efficiently than we can.

We also have multiple choice exams now, which we didn’t have before. So, the whole way in which we work has become much more efficient, and it needed to be,  to cope with the level of growth.

Do you know how many people take part in your qualifications each year then compared to now?

I think it was around 15,000 people a year when I started. It is now around 55,000 people a year. We had very few qualifications then, and that was one of the things I initially came here to do – to look at the product portfolio and marketing. So, one of the first things I launched was the International General Certificate and that was the springboard for a lot of our international growth, followed by the international diploma. The way in which we develop our qualifications has changed. We are not developing them now for a UK audience we are developing for a UK and international audience.

What do you think is your biggest achievement since being here?

I have been very fortunate in recruiting a great team. With one exception I have recruited the entire senior leadership team, and the one I didn't recruit I wouldn't swap for anything. So, it has been working with that team and getting the product range right and developing the international market.

My proudest moment was when we won the Queen's Award for Enterprise for Outstanding Achievement in International Trade in 2014. Stuart, the director of relationship management, came in specifically to work with me on the international side. We both went to Buckingham Palace and met the Queen and Prince Philip. That was a pretty amazing experience having a conversation with the Queen about health and safety.

How much has the health and safety sector changed in your time here?

If I look back to the late 70’s and the number of people that were killed in accidents at work, that has declined so dramatically. Part of it is that UK industry has changed, but even accounting for that, the improvements in health and safety standards has been amazing. I think that NEBOSH has really played a part in that by giving people the competence to make their workplaces safer. Respect for the profession has changed.

What is next for NEBOSH. Can you give an update on how the recruitment process is going?

Our chair is working with an external agency to recruit a new chief executive. I am out of that process now, but I was working with our Chair to make sure that the advert was right and the person specification for the recruitment agency was there. There should be an announcement very soon.

It is an exciting stage to come in as a new chief executive. We have a new IT system which will make it so much easier to develop new products and to develop statistics and get data. We review our products every so often, and we are working with our course providers and others to look at the whole way in which we assess. It is a time of a lot of change, so the new chief executive will be delivering the benefits of the changes that I and my team initiated, and the opportunities that the new system presents.

What do you think your replacement's main opportunities will be?

There is a huge opportunity working in collaboration with other people. We have been working with the Health and Safety Executive for the last couple of years, we do the qualification for newly appointed HSE inspectors, and have two joint qualifications that we have launched with them. There are opportunities for new joint ventures. There is still a lot of potential for growth outside of the UK as well.

What is the legacy that you leave behind?

I would hope that I am leaving NEBOSH as the most respected provider of health and safety qualifications anywhere in the world. We are specified by multi-national companies as the qualification that they require for their health and safety staff and they specify us down their supply chains as well. They recognise that we equip people to be really good safety practitioners.

I am proud of what we have achieved here. But the thing that I am most proud of are our students and the people that have achieved our qualifications because they deliver a safer world for their colleagues. I didn't go into health and safety to be a business leader, although that is what I have become, I wanted to make a difference, and that is what is important to me.