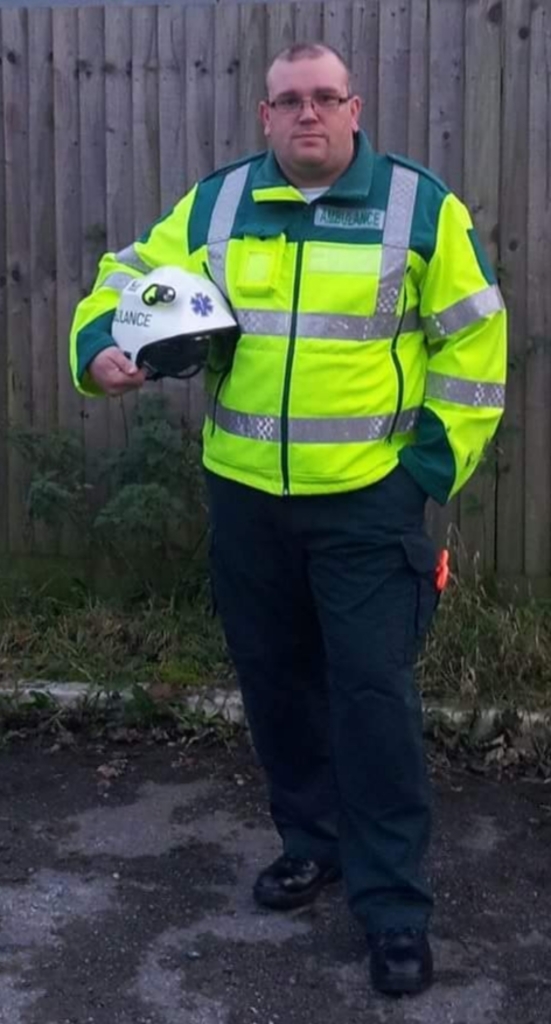 “IT WAS like I wasn't leading my own life. I was scared, worried for the future, and the stress of not knowing either way took its toll on family life. I would isolate myself in my workshop, as I felt I couldn't talk and it was wrong for a man to cry”, explained Scott.

Scot Grant is a 35-year-old ambulance technician, working both in the private medical sector and now within the NHS. He is married with four children. Outside work, he volunteers with Search Dogs Sussex as a lowland rescue medical technician, providing a service to police forces when looking for vulnerable missing people. The team currently has 19 human and 10 dog volunteers.

Scot really enjoys being able to combine his day job with his voluntary role and assisting people in his community. Five years ago, while at work, Scot suffered a possibly life-threatening needlestick injury from a used injection needle..

The crew of his private ambulance had been transferring a critically-ill patient between hospitals and had loaded the patient onto the ambulance. Scot set off driving under emergency conditions with the vehicle’s blue lights flashing.

During the journey, because the sun was low in the sky, Scot put his hand up to pull down the sun visor. As he did so, he felt a sharp prick in the side of one of his fingers, which began to bleed.

“To start with, I was not sure what had happened,” explains Scot, “but because we had an ill patient in the back, I sucked my finger and carried on driving for another 30 miles.”

On arrival at the hospital, the crew transferred the patient and then returned to the ambulance. “I told my crew mate what had happened, and we looked to see what had caused the puncture wound,” he remembers.

“We were both disgusted to find that someone who had used the private ambulance before us had pushed a used intra-muscular injection needle into the sun visor rather than dispose of it properly in a sharps bin.”

Scot followed the sharps injury procedures put in place and attended A&E at the hospital where he had taken the patient. “They were great,” he recounts. “When I informed them what had happened, they cleaned the wound thoroughly and then carried out blood tests to see if I had picked anything up from it, in case it had it been used on a HIV, hepatitis or other infectious patient.

“As well as being angry, deep down I was scared I would contract something, so they offered me the chance to see a counsellor.”  The doctor also explained that the usual course of action was to start people on a course of post-exposure prophylactic antibiotics.

Scot suffered extremely unpleasant side effects from the antibiotics, being sick and feeling terrible for as long as three months. “I was off food and felt I couldn't have an intimate relationship with my wife in case I had contracted something,” he recalls. “I was scared I was going to pass it on.”

The needlestick had an extremely distressing effect on Scot’s life. Anger was quickly followed by fear.  “Mentally, it was like I wasn't leading my own life. I was scared, worried for the future and the stress of not knowing either way took its toll on family life.

“I was described as being like Jekyll and Hyde by my kids. I would isolate myself in my workshop as I felt I couldn't talk and it was wrong for a man to cry.”

The needlestick incident also had a damaging effect on Scot’s work, where he began to feel negative towards his colleagues. “No-one would own up to putting the sharp in the sun visor, and because everyone denied it, I struggled to trust them. Because of someone's stupidity, I was living a time of hell.”

He has since changed employers moving from the private medical sector to the NHS and is back to loving his job. Scot had regular blood tests throughout his treatment that fortunately all turned out negative. However, he had to wait six months from the date of the injury to find out if he had contracted HIV. It was a huge relief to both him and his family that the result was clear.

“Working in a busy city, we regularly attend areas where drug users hang out,” says Scot. “To begin with after the injury, I was extra cautious and wouldn't kneel down in case I knelt on something.

“I would put on three pairs of examination gloves and still to this day I won’t use hand rails in communal buildings, as there have been cases of needles being taped underneath to deliberately injure people.”

These days, the NHS crew’s vehicles are made ready and prepared for them, which Scot hopes should limit the risk of anything like this ever occurring again. However, he still makes a thorough visual check of each ambulance before leaving the station.

When searching for missing people in his volunteer role, they primarily work in woodland and sometimes come across evidence of drug use.  “I now carry a set of HexArmor® PointGuard® Ultra 4041 gloves given to me by uvex in my search vest, so should I need to search an area I deem to pose a risk, they go on immediately. I also keep them in the top of my work bag when out in an ambulance,” he reports.

Scot approached uvex at the beginning of 2018 to see if they would be willing to support the search team with some PPE to keep them safe when out and about. “Up until this point, each individual member funded their own equipment, travel, and expenses. I was contacted by Clair Weston from uvex and arranged a meeting with her.”

Since then, uvex has very kindly donated to the team some uvex quatro pro safety boots and more recently, the uvex 2 safety shoes. uvex has also supplied each member with safety glasses including the uvex i-works, pheos, pheos CX2, sportstyle and super OTG, as well as giving Scot a pair of the HexArmor® PointGuard® Ultra X 6044 needlestick gloves to try out.

“I think they are great,” he enthuses. “They are comfortable and provide me with an increased feeling of being safe whilst working and searching.” After such a terrible ordeal, HexArmor® has provided Scot with peace of mind at last.