A Tameside housing trust has been fined after a worker suffered severe injuries to his left hand when it was struck by a metal blade on a ride-on mower. 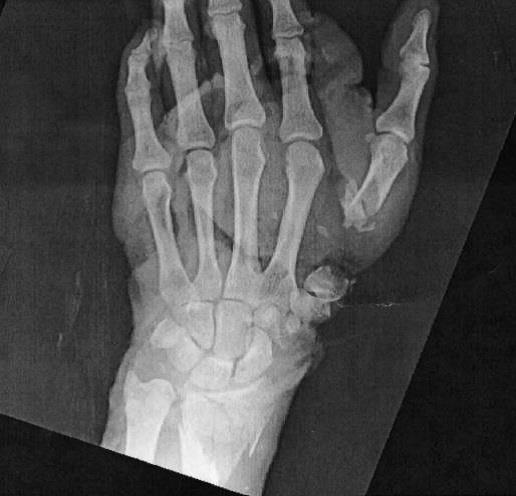 The 24 year old from Stockport, who has asked not to be named, sustained several broken bones and had to have his thumb and forefinger amputated following the incident on Hitchen Drive in Dukinfield on 28 March 2014. A hospital x-ray has been released showing the extent of his injuries.

New Charter Housing Trust was prosecuted by the Health and Safety Executive (HSE) after an investigation found the organisation had failed to consider the risks from the work, provide professional training or to give clear instructions on what to do if the mowers became blocked.

Manchester Crown Court heard the worker was using a ride-on mower for the first cut of the season, with a grass box attached. The chute to the grass box often became blocked, as the grass was long and wet.

On one occasion, the employee reached into the chute to clear a blockage when his hand came into contact with a metal fan, which was still rotating. He suffered serious injuries as a result, and is now unable to grip with his left hand or use his remaining fingers.

The court was told the worker had not received training on how to use the mower, and did not know that the fan continued to rotate for around 30 seconds after the engine was switched off.

New Charter Housing Trust, of Cavendish Street in Ashton-under-Lyne, was fined £140,000 and ordered to pay £70,000 in prosecution costs after being found guilty of a breach of the Health and Safety at Work etc Act 1974.

Speaking after the hearing, HSE Inspector Sarah Taylor said: “A young worker has suffered injuries that will affect him for the rest of his life but they could easily have been avoided. New Charter Housing Trust should have planned the work properly and provided appropriate training, so workers knew to wait for the fan to stop.”