The British Occupational Hygiene Society (BOHS) has expressed concerned at the ongoing lack of awareness of the dangers of asbestos, revealed by a recent research survey of tradespeople in Britain by the Health and Safety Executive (HSE). 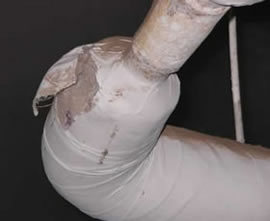 In early October, the HSE announced a major new campaign to focus on the dangers of asbestos faced by tradespeople. At the same time, the safety watchdog released the results of a recently commissioned research survey which showed that tradespeople, including construction workers, carpenters, painters and decorators, could come into contact with asbestos on average more than 100 times a year.
BOHS, as the Chartered Society for worker health protection, said it was 'greatly concerned' at the ongoing lack of awareness and understanding highlighted by the HSE’s research and pledged its supports for the safety watchdog’s new asbestos safety campaign aimed at this group of workers.
The survey of 500 tradespeople in Britain, undertaken on behalf of the HSE in September 2014, showed that:
Worryingly, the survey also revealed some common myths believed by those at risk, with one in seven (14%) believing that drinking a glass of water will help protect them from the deadly dust and one in four (27%) thinking that opening a window will help to keep them safe.
According to HSE figures, 20 tradespeople, on average, die every week from asbestos-related diseases and 1.3 million tradespeople are potentially at risk of being exposed to asbestos.
Commenting on the issue, Mike Slater, president of BOHS, said: "Asbestos is the single biggest cause of work-related deaths in the UK and BOHS would like to emphasise its full support for this new HSE campaign. The HSE’s research survey has illustrated the very real need for this campaign and for raising awareness amongst British tradespeople about the dangers of asbestos in the workplace. In particular, there needs to be a better understanding that asbestos is not a historical problem but a current and potentially life threatening issue to be considered on each and every job.”
He added: "Every year, 12,000 people die as a result of occupational respiratory diseases, about two-thirds of which are due to asbestos-related diseases or chronic obstructive pulmonary disease (COPD). We at BOHS believe occupational lung disease is an area which deserves greater future focus and in the spring of 2015 we will be launching a new campaign in this regard, to help employers in the construction industry better control hazardous substances, including asbestos, in the workplace. We therefore welcome the HSE’s new campaign as a very positive development in the fight against occupational lung disease.”
MORE FROM THIS COMPANY