Team England urges workplaces to take up the sporting challenge

A number of Team England athletes including silver medalist, Laura Samuel are hoping their table topping performance at the Commonwealth Games will help to inspire participants to push for their own podium places on the Workplace Challenge leaderboard. 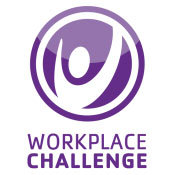 Triple jumper Laura who struck silver in Glasgow has been encouraging individuals throughout England to get more active by taking part in the #TeamEngland Workplace Challenge.
"I was thrilled to win my silver medal, it was certainly one of the highlights of my career to date, something I will always treasure,” comments Laura.
"It has also been great knowing that my performance may have inspired people out there to get more active and perhaps take a up a sport for the first time.”
#TeamEngland Workplace Challenge has been encouraging deskbound workers everywhere to make a half year resolution to rise up from their swivel chairs and get more active.  Since the national challenge began in January more than 15,500 workers from around the country have logged an impressive 372,000 hours of activity.
Throughout the Commonwealth Games, Team England athletes who topped the medal table for the first time in 28 years, were setting their own challenges to members of the public in order to encourage them to get more active and to perhaps try one of the sports on display at the Commonwealth Games.
Laura Samuel who won a silver medal in the triple jump challenged the public to perfect the plank – an exercise she uses to help tone her core muscles.
"I have been challenging everyone to do the plank for 30 seconds each day," explains Laura. "Then, by adding 10 seconds per day, it will really help people develop their core strength. It is an exercise I perform to help me stay strong throughout my jump phases and I'm sure the public will feel the long term benefits too."
For those who have been inspired by the performances of Laura and Team England, there are still 10 days to go before the leaderboards close at midnight on 16th August.
Those topping the leaderboards will be eligible to win a range of prizes, many of which have been donated by the National Governing Bodies of sports that featured in the Commonwealth Games and have supported the Workplace Challenge including a badminton racket from Badminton England and 10 tickets to the 2015 British National Championships from England Squash & Racketball. Other prizes include a waterproof iPod swim kit, a Garmin GPS cycling computer and FIRA  Euro Rugby Sevens tickets!
In addition to the prizes, it is hoped that participants will have been inspired to make lifelong changes and continue their new active lifestyle beyond the end of competition – perhaps by taking up one of the exciting sports that featured in the Commonwealth Games.
#TeamEngland Workplace Challenge is funded by Sport England and is being delivered by the County Sports Partnership Network and the British Heart Foundation Health at Work team, in collaboration with 34 County Sports Partnerships across the country.
To find out more about #TeamEngland Workplace Challenge events and activities taking place in your region, visit www.workplacechallenge.org.uk.
MORE FROM THIS COMPANY