A bespoke edge protection solution from Combisafe has protected workers during the fabrication of a 35 metre long pedestrian walkway at the new Crossrail Custom House station. International construction firm Laing O’Rourke, which won the contract to build the station next to the London Excel Conference Centre, turned to the company for its edge protection knowledge, which was required to guarantee worker safety throughout the project. 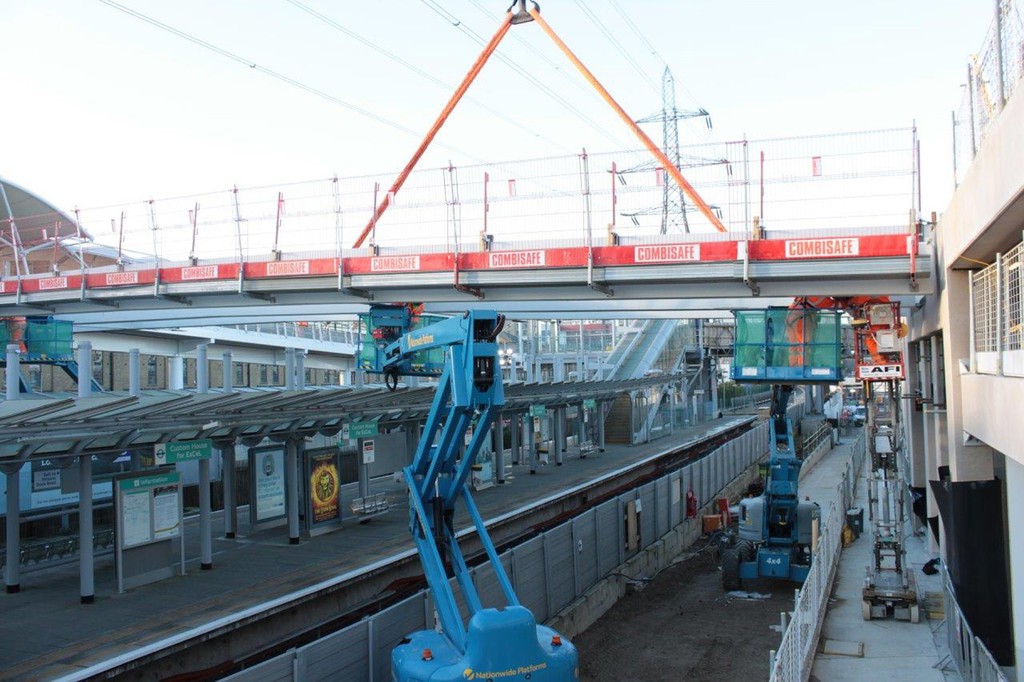 The companies were faced with a unique challenge, with workers forced to operate directly over a fully operational and electrified rail line and under the main electrical cables serving Canary Wharf.

As traditional solutions such as scaffold towers and hydraulic platforms were not viable, it was decided that the structure would be built off-site in four sections which would then be hoisted into place in just one day, when the railway would be shut. The Combisafe hanging platform was pre-attached to the bridge beams while at ground level, and both the bridge and platform were lifted into place reducing the need to work at height.

"With the walkway needed to ensure worker security as soon as it was in place, instant edge protection was a necessity,” began Paul Keevill, general manager at Combisafe. “We therefore provided the Combisafe hanging platform, as an effective alternative to scaffolding or hydraulic platforms. The modular system can be quickly installed to create a safe working area around the edge of a wide range of structures.”

The hanging platform is a lightweight system constructed of a series of consoles which are attached to a structure. Steel boardwalks or scaffold planks are then laid to create a walkway. Safety posts and barriers are fitted to the outside of the walkway to protect workers against falls. Once attached to the walkway, the edge protection system was operational, providing a fully protected working area for all trades involved on the project.

“The confined working area and complexity of the site were two major challenges we faced during the station build,” said James Redman, engineering lead - Custom House, Laing O'Rourke Infrastructure South. “The hanging platform was the perfect solution, helping us overcome both safety and environmental issues on a number of levels. Not only did it provide a solid, safe working environment, but it enabled building and safety inspectors from Crossrail full access to such a key component of the build at all times.”

In addition to the system, Combisafe ran training sessions for four Laing O’Rourke operatives prior to the installation. The company’s temporary works coordinator was also trained to enable regular weekly checks to ensure safety remained a top priority throughout the project.

“Having worked with Combisafe on previous projects, we knew it was the best company to turn to given the unique nature of the situation. From start to finish, the team were understanding and supportive, even joining early discussions during the planning stages in order to completely understand the safety challenges. Thanks to its expertise we were able to create an innovative safety solution which was flexible, durable and helped keep our workers permanently safe during the 18 month long development,” concluded James.