The OID photoelectric sensor from ifm electronic, launched less than two years ago, has now been joined by a new version featuring the safer class one laser. 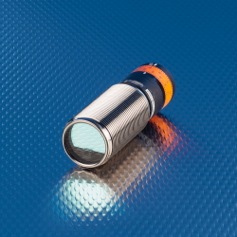 The performance of the OID has been retained in the new version, OID250; the sensing range is still 2m and the background suppression has been enhanced. According to ifm electronic, it is so good that it won’t even see high visibility PPE beyond the set switch point. The target colour doesn’t matter, nor do shiny surfaces, and the angle of incidence can be oblique. All this allows the user to fit the sensor out of the way above a standard conveyor, instead of a reflex device and a reflector, thus saving installation cost, too.

The setting dial is calibrated in centimetres and the housing is a standard M30 barrel. The OID can be used in place of ultrasonic sensors, where the accuracy of a narrow beam is needed. Another feature of all OID versions is the inclusion of an IO-Link interface. This allows access for time delays or remote setting, and device settings can be stored externally for a quick swap-out should the need arise.