What unnecessary risks are you taking?

What would you think if you saw someone using a shopping trolley as a car jack? Or a newspaper and sunglasses as an improvised welding mask? You’d probably ask yourself why anyone would put themselves in that kind of danger. Here, Andy Burns, technical business manager at thermal fluid specialist Global Heat Transfer, explains why companies should never take any chances, especially where testing and analysis are concerned. 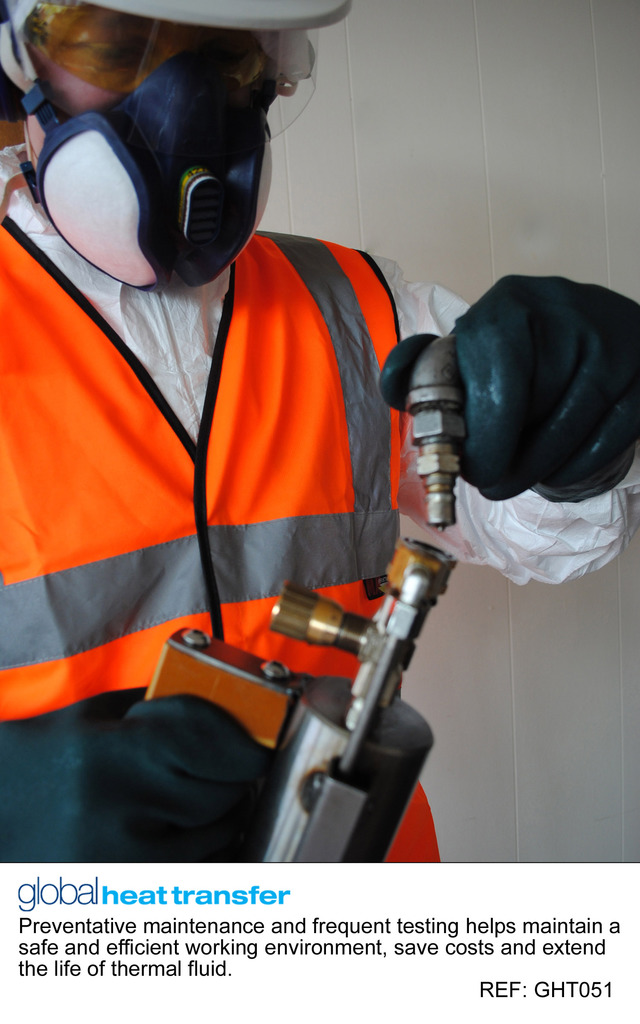 The Dangerous Substances and Explosive Atmospheres Regulations (DSEAR) of 2002 and the Explosive Atmosphere Directive (ATEX 137) set the minimum requirements for protection against risks from fire, explosions and similar events arising from dangerous substances used or present in the workplace. The legislation introduced more rigorous testing for operators, including regular and representative analysis of thermal fluids.
Respecting DSEAR guidelines helps companies identify early warnings regarding process problems, helps maintain a safe and efficient working environment and save costs. Preventative maintenance and frequent testing can also help extend the life of thermal fluid. More importantly, a timely reaction to early warnings can help you avoid replacement of costly equipment and even save lives. In environments where the risks are so high, no expense should be spared to ensure legislation is respected and thorough efforts are made to keep employees and premises safe.
What risk?
In a nutshell, the dangers caused by the lack of preventative maintenance are rooted in the degradation of thermal fluid. Over time, heat transfer fluid breaks down through a process called 'thermal cracking'. The fluid’s molecules are broken down into smaller particles and several types of fractions are released from this chemical reaction. The first side products of thermal cracking are light ends that have a low boiling point and are very volatile.
The second category of thermal cracking decomposition products are heavy ends, which recombine to form heavy polyaromatic molecules that usually cause fouling of the heat transfer system. As a result, carbon molecules will stick to the system internals and reduce process efficiency, unless cleaned and flushed in time.
It is crucial to remember that thermal fluid does not go from being fit for use to needing replacement overnight. There is a grey area where fluids can be managed against what specialists call 'the degradation curve'. Degradation is steady if a system is operated properly. Only as the fluid approaches the end of its practical working life, there is a gradual curve which eventually drops off very sharply. This sudden change in the quality of thermal fluids is one of the reasons why regular and preventative maintenance is so important.
Diluting the thermal fluid by topping up is a cost effective and durable option only while the fluid is in the early part of the degradation curve. After the condition of the fluid has significantly deteriorated, dilution is no longer a viable alternative. It would have the same effect as putting a new torch battery into a two battery torch alongside a battery that has already been used for some time. It wouldn’t be a long term solution and would result in the system not operating at optimum capacity. That being said, the best thing to do when the thermal fluid reaches the end of its lifespan is to flush and clean the system, prior to refilling it with a fresh charge of heat transfer fluid.
Hot, closed and circulating
Despite the clarity of existing legislation and the dangers of neglecting thermal fluid analysis, companies often fail to perform the sampling DSEAR requires and carry out irrelevant tests, including 'lube oil tests'. These are sometimes non-applicable and don’t always provide the necessary information.
Sample methodology is crucial – incorrect sampling give inaccurate flash point results, which can have very dangerous consequences. Unless the fluid samples are collected when the oil is hot and circulating, they will reveal artificially high flash point values. This incorrect sampling will lead to the conclusion that the system is safe, when in reality it might not be. Inaccurate samples can have negative consequences, including decreased energy efficiency, unmanageable flash points and a dangerous working environment with risks of explosions.
The sample also needs to be 'closed' so that no potential atmospheric particles can contaminate it or distort the results. An open sample would also allow light ends to flash off to the atmosphere, instead of remaining in the sample, which produces unreliable readings.
Test often and well
Frequent sampling is crucial. DSEAR says manufacturers must show they are taking appropriate measuires to mitigate health and safety. GHT encourages its clients to perform the 11 point test at least twice a year, every three months ideally, and even more frequently than that in some applications.
Finally, testing in an accredited lab, in the correct conditions is the key to getting accurate results. As with general maintenance, identifying a problem early helps avoid complications without excessive cost or efforts.
The complexity of thermal fluid testing might seem intimidating, but the importance of the process cannot be stressed enough. Respecting legal regulations, performing preventative maintenance and frequent testing are the best ways to ensure your company is not taking any unnecessary risks. Otherwise, you might as well be using newspaper and sunglasses instead of personal protective equipment.
MORE FROM THIS COMPANY
Send Enquiry
View Company Profile
RELATED ARTICLES
GALLERY