A Manchester firm has been ordered to pay nearly £90,000 in fines and costs after an employee was crushed by a giant fish tank that toppled off a forklift truck. 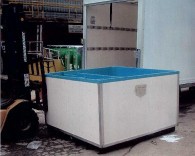 The 59-year-old from Middleton, who has asked not to be named, broke both his legs in the incident and doctors had to amputate his right leg below the knee due to the extent of his injuries.
Alloy Bodies Ltd was prosecuted by the Health and Safety Executive (HSE) after an investigation found the work had not been planned, supervised or carried out safely.
During a six-day trial, Manchester Crown Court heard that the company manufactures lorry trailers, but that its bespoke services department had built a two-metre-wide fish tank for one of the firm’s directors.
The tank, which weighed around 200 kilograms, was being loaded into the back of a van on 1 June 2010 when it toppled from the forklift truck and struck the worker. The court was told the fish tank was not secured to a pallet before being lifted and workers struggled to load it onto the van due to its size.
In addition to having part of his right leg amputated, the injured employee also had to have a pin fitted into his left leg. He now has a prosthetic limb and is still unable to return to work, more than three years on from the incident.
Alloy Bodies Ltd, of Clifton Street, Miles Platting, was today (9 December 2013) fined £30,000 and ordered to pay £56,621 in costs after being found guilty of a breach of the Health and Safety at Work etc Act 1974.
Speaking after the hearing, HSE Inspector Alex Farnhill said:
"This was an entirely preventable incident which resulted in an employee having to have part of his leg amputated. His whole life has been affected by the shortcomings of this company.
"No effort was made to plan the work in advance, despite it being a highly unusual activity for employees at the factory. The firm should have considered the risks and found a safe way of moving the fish tank.
"If it had been secured to a pallet and loaded onto a larger vehicle, rather than a van, than the terrible injuries the worker suffered could have been avoided.”
Information on vehicle safety in workplaces is available at www.hse.gov.uk/workplacetransport
MORE FROM THIS COMPANY