SAFETY CAMPAIGNERS are calling for an increased police presence on the roads to deter people from breaking the law, as a report is launched revealing that drivers feel roads are more dangerous now than they were five years ago. 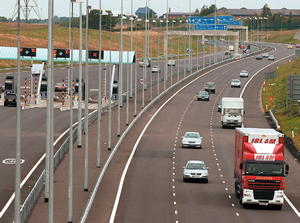 The report, by road safety charity Brake and Direct Line, based on a survey of more than 1,000 drivers, revealed that 7 in 10 feel that the roads are more dangerous now than five years ago, with less than 1 in 10 disagreeing [1]. Drivers also think that the numbers of speeding vehicles and the extent of mobile phone use behind the wheel has increased over this period but that the number of police cars has declined.

With severe funding cuts impacting the police service, Brake is concerned that a diminished police presence is contributing to Britain’s stagnating road safety record. Brake’s report revealed that drivers share these concerns, with 8 in 10 agreeing that a visible police presence deters people from breaking the law and a further 8 in 10 thinking there should be more police cars patrolling the roads.

More than 70 people are killed or seriously injured on British roads every day, a figure which has failed to decline over the past decade [2]. Police officers play a vital role in enforcing the law, but equally important is their role as a deterrent to dangerous driving, with research showing the safety value in a visible police presence. In the past three years there has been 15% decline in road policing numbers in England and Wales, with just 4,457 full time equivalent officers in March 2019 [3].

Road safety charity, Brake, want to see increased investment in road policing to halt the stagnation in road safety and ensure there is visible deterrent to dangerous driving on our roads. This is a view backed up by drivers, with 6 in 10 agreeing that the Government should make road policing an investment priority.

Commenting Joshua Harris, director of campaigns for Brake, said: “Drivers’ perceptions tell us a lot about the safety of our roads and so it’s deeply concerning to find that drivers feel the roads are more dangerous than they were five years ago. With roads policing suffering severe cutbacks, and drivers noticing the decreased police presence on our roads, perhaps this shouldn’t come as such a surprise. We have to act to address the stagnation in British road safety by increasing police numbers, to deter and enforce against dangerous driving.”

Steve Barrett Head of car insurance at Direct Line, said: “Education, legislation and enforcement are essential to making our roads safer. As this research shows road users feel our roads are not as safe now as they were five years ago. Changing driver behaviour can only be achieved through ensuring they are aware of the potential consequences of their actions and having robust laws in place that are able to be enforced.”