Builder fined after sacks of rubble thrown from building window

A Coalville construction firm working in Leicester has been sentenced after workers were spotted throwing sacks of rubble from a building project opposite a police station. 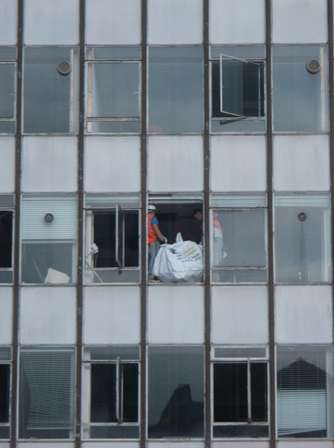 Police officers called the Health and Safety Executive (HSE) as debris was being launched out of a fifth floor window to a flat roof several metres below. They also saw unsafe working at open edges with no fall protection. HSE inspectors arrived at the site on 2 October 2014 and witnessed the activity first hand, and after investigating prosecuted the firm. J A Ball Ltd. was contracted to carry out work to refurbish former office space into flats at Allied Place, 44 Abbey Street, Leicester. Leicester Magistrates’ Court was told company director Adam Ball decided soft stripping work should begin and walked the site with a worker who was not a site manager while issuing instructions.

The court heard Ball had not ensured a refurbishment and demolition asbestos survey had been carried out on the site before work commenced. No paperwork was given to the worker regarding the methods to be used to carry out this work. No risk assessments or site paperwork was given to Ball’s employee and no site file existed. There was a substantial amount of waste generated and placed into the rubble bags. These were initially taken down the stairs to the flat roof and then dragged across the flat roof and thrown over the edge into the skip at ground level. The flat roof had a number of unprotected fragile roof lights across it and there was no edge protection on the flat roof. Mr Ball’s employees then decided it would quicker to simply throw the rubble bags out of the window while they were working on the fifth floor. So while standing on the window sill of an open window bags were thrown to the flat roof before being dragged to skip.

HSE told the court that Adam Ball had arranged for work to begin on a site without ensuring that the proper procedures had been followed, and that all workers had been given adequate information. He also made incorrect assumptions about his employee being competent to manage this project.

J A Ball Ltd, of Property Court, Telford Way, Stephenson Industrial Estate, Coalville admitted breaching of Regulation 4(1) of the Work at Height Regulations 2005 and was fined £13,000 with £1182.00 costs.

HSE inspector Sarah Hill said: “‘It’s completely unacceptable for anyone to work at open edges with no fall protection As you can see from the pictures, there was a possibility of a fall, the consequences of which could have led to people being seriously injured or killed. Additionally there were real concerns for public safety from falling materials. “Work on refurbishment projects needs to be properly planned, and all management procedures put in place before any work activity commences. Work at height is still the biggest cause of fatal accidents in the construction industry and unless the correct controls are in place before work starts, lives will be needlessly put at risk.”