Louise Hosking, vice chair at IOSH Chiltern Branch and director at Hosking Associates, reflects on the 10th anniversary of the Buncefield explosion - and the impact it had on how fuel depots are now expected to operate. 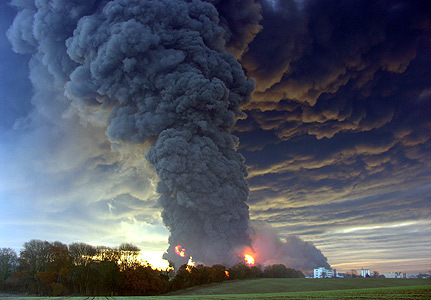 On Sunday, 11 December 2005 at 6.01am, there was a huge explosion which led to further explosions and eventually engulfed 20 large fuel storage tanks at the Buncefield fuel depot in Hemel Hempstead, Hertfordshire. The event measured 2.4 on the Richter scale and the resulting smoke cloud was visible from space. At 6.08am, a major emergency was called.

Fuel tank 912 was overfilled which led to more than 300 tonnes of petrol being released from the roof of the tank. Petrol vapour was created and became a dense fog covering a vast area, caught between buildings and hedges. The actual ignition source was not determined.

There were 43 injuries and miraculously no one was killed. The depot was on one of Europe’s largest business parks where there were 630 businesses employing nearly 17,000 people - which equated to one in three of the population of Dacorum Borough Council’s population. Hundreds of homes were evacuated and those in the surrounding area were told to keep doors and windows closed. Buncefield is the UK’s fifth largest fuel depot and a major hub in respect of fuel distribution around the country. Fire fighters were pulled in from around the country and firefighting foam had to be sourced from abroad. The M1 was closed and some businesses never recovered.

Gauges fitted to the tank which might have warned of an overfill failed. A high level cut off switch had previously been removed for inspection and maintenance, but not reinstated correctly so this also failed. Bunding around the tanks were not sufficiently robust and were breached resulting in widespread ground pollution which was later exacerbated by the addition of fire water.

There were multiple organisations involved in the running of the facility, but it was being operated on a shoestring with a maintenance backlog. Greater attention was being placed on personal safety rather than the major events which could occur on a site of this nature, or the potential consequences to people and the environment.

What were the consequences?

In July 2010, five organisations were collectively fined more than £10million at St Albans Crown Court for their part in the failures which led to the incident. The largest fine was directed at French energy giant Total, which was fined £6.2m. The judge, Sir Michael Calvert-Smith, said: “This case has to do with slackness, inefficiency and a more or less complacent approach to matters of safety.”

A number of reports were published following the incident and a process safety leadership group was established in 2007 to improve safety within the industry. In 2009, the HSE published 'Safety & Environmental Standards for Fuel Storage Sites'. This identified a number of key recommendations, and forms the basis of how fuel depots like Buncefield are now expected to operate.

Some of the key points include:

The Control of Major Accident Hazards Regulations 2015 (COMAH) is enforced by the relevant competent authority - principally the HSE and Environment Agency. It is relevant for sites where there is significant threat to safety or the environment mainly in the chemical industry and other industries where the storage of dangerous substances is reached. All such sites are listed within a public register.

Anyone in control of these sites must ensure:

Prevention must be based on reducing risk to as low as is reasonably practicable and via the use of best available technology not entailing excessive cost (BATNEEC.)

Under COMAH15 requirements, a safety report must be submitted to the enforcing agency which includes a major accident prevention policy. This must include the consequences if an event were to occur and how this would also be planned for. The plan must be tested, checked and reviewed. When a real incident occurs, it is stressful and those involved must be given the opportunity to practice the right response.

Buncefield is now a learning site and has been redesigned to meet these standards.