For hazardous applications such as establishing the health of electrical components at a substation, the ability to measure temperature accurately over a distance is critical. The high-resolution FLIR T840 offers a solution 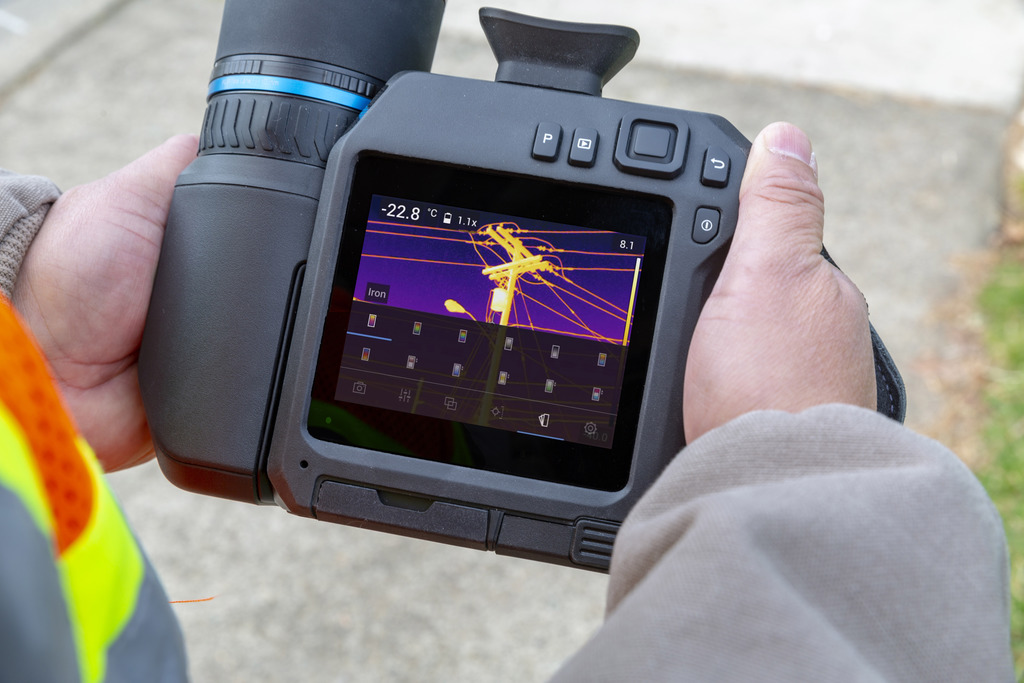 You can compare resolution to human eyesight. If you have 20/20 vision, you can define the smallest letters at the greatest distance and that’s the equivalent using an infrared camera with a high-resolution detector. A low-resolution detector is the same as a person whose sight is low on the visual acuity scale. The vision is improved by glasses and in the case of the IR camera by adding a magnifying glass to optically reduce its distance from the target.

This enables the camera to take an accurate temperature measurement by allowing it to get more detector pixels on the target, giving more detail in the thermal image. FLIR comments that digital zoom doesn’t improve accuracy, so higher resolution or also narrow field of view is key here.

To stand a chance of diagnosing an electrical fault with a less sensitive camera means you must stand closer to the subject and this is where safety is compromised as there is serious risk of arcing.  So, although the entry-level, troubleshooting cameras with a pixel array of typically 180 x 160 or less are great toolbox tools they are only suited to doing a quick short-range scan for hotspots where it is safe to do so.

The higher resolution cameras that best serve this type of application are also available with software features that allow the image to be enhanced. In the case of the FLIR T-Series, UltraMax technology is a good illustration. It captures a series of thermal images and combines the data into one new image that has many more pixels of the target, resulting in a resolution greater than that of the original camera detector.

In fact, the result effectively quadruples the thermal pixels, including full radiometric measurement data.  This means that with UltraMax, a 640 x 480 resolution model can boost an image to 1.2 megapixels and a top of the range 1024 x 768 camera to 3.1 megapixels.

The sophisticated high-resolution cameras also come with exchangeable lenses so they can be used optimally for a broad variety of applications, and developments have recently been introduced that greatly improve this combination for small target/long distance work.

The FLIR T1k thermal imaging camera is often used for power generation inspection and specified with an extra seven-degree lens to optimise spot-size ratio. This combination of kit can make it on the heavier side weighing around 2kg.

Customer feedback confirmed that users wanted a camera with an optional magnifying lens that was more portable and sufficiently stable to hold in one hand. As FLIR develops and manufactures its own lenses in-house, it has been able to achieve that in its new FLIR T840 model with Ultramax and six-degree lens that is suitable for looking at connectors on overhead powerlines.

While a thermal imaging camera with the maximum resolution detector – 1024 x 768 pixels – is still needed to get the best image of a conductor on a 90m tower, this model is well suited to a wide variety of inspection applications over distance.  And to make it even more adaptable it comes with an eyepiece, allowing it to be used in all weather conditions and especially on sunny days.