Local groups in the spotlight

Safety Groups UK, supported by the Royal Society for the Prevention of Accidents (RoSPA), has recognised 19 voluntary groups for their excellence and achievements in making workplaces safer and healthier around the country. 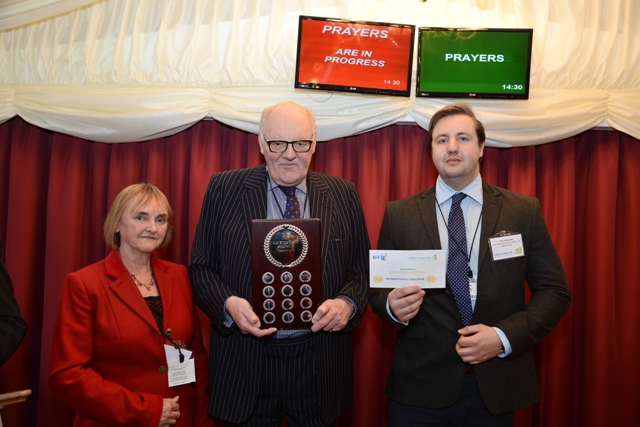 As part of the annual Alan Butler Awards, leading organisations within the Safety Groups UK network were presented with Gold, Silver and Bronze honours during a ceremony at the House of Lords.
Harrogate and District Health and Safety Forum scooped the top accolade of overall winner as well as being one of six Gold Award winners. Judges were impressed with how the group had developed a practical partnership with Harrogate Borough Council’s Economic Development Unit in order to reach more local companies.
Meanwhile, Roy Hewson, vice president of Swansea and West Wales Occupational Safety Group, received the Maurice Adamson Award, which honours outstanding individual commitment. Roy has been an active part of the Welsh group since the 1970s and was nominated by colleagues for being a "consummate safety professional, approachable, sensible, practical and unflappable”.
The Safety Groups UK network is made up of around 70 local groups, each of which consist of health and safety professionals who give up their free time to promote, share information and offer practical help to employers in their communities in a bid to prevent accidents and ill health at work. Their current campaign focus is on raising awareness of health risks at work.
Factors taken into consideration by judges included each group’s programme of events and seminars; member recruitment and retention; communication with businesses; and how it supported key themes in the overall health and safety strategy led by the Health and Safety Executive (HSE).
Roger Bibbings, occupational safety adviser for RoSPA and secretary of Safety Groups UK, said: "Not enough people realise there is a fantastic network of hard-working volunteers working across the UK in local safety groups, giving up their time for free to make a vital difference to workplaces up and down the country.
"The work they do is laudable, but they often hide their light under a bushel. The Alan Butler Awards scheme is all about celebrating and publicising these stellar efforts, which take place day in and day out to the benefit of people in businesses of all kinds, particularly SMEs.”
Winners at the Alan Butler Awards, sponsored by BT, were:
Lord Brougham and Vaux, president of Safety Groups UK, presented the awards at the ceremony on January 27, which was attended by RoSPA’s new president Lord McKenzie of Luton and Jane Willis, director of the cross-cutting interventions directorate at the HSE.
www.safetygroupsuk.org.uk.
MORE FROM THIS COMPANY
Send Enquiry
View Company Profile
RELATED ARTICLES
GALLERY