How safe are manufacturing workers from welding fumes? New findings reveal that toxic welding gases are a potential hazard to everyone, not just the welders themselves. Dominic Murphy reports. 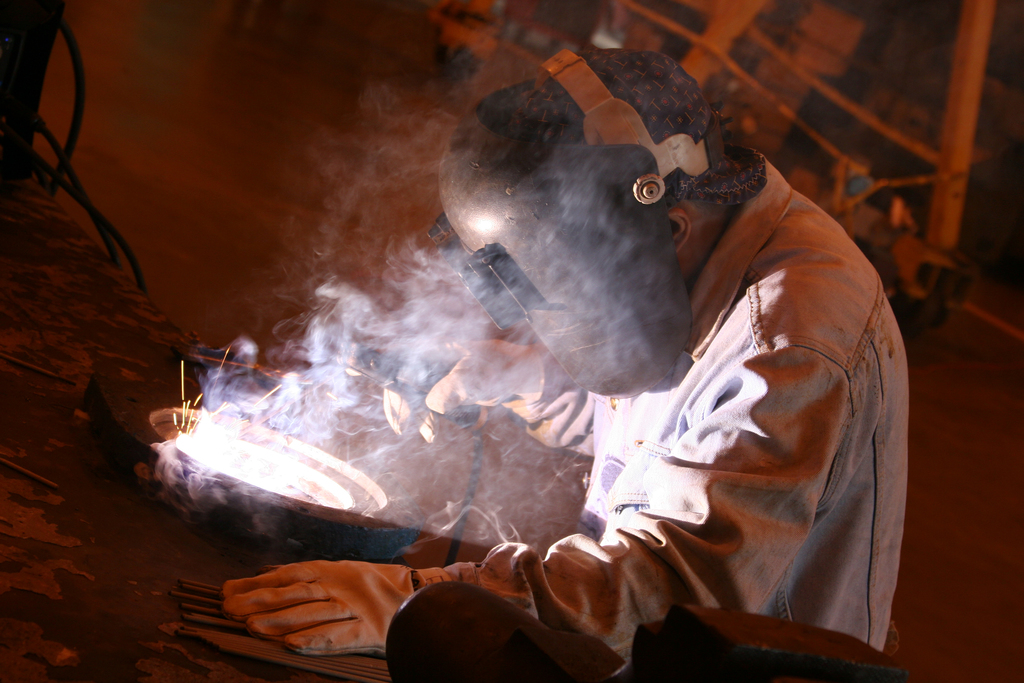 HOW MUCH do you know about welding fumes? That they can make you seriously ill? That, in some cases, regular exposure can lead to diseases that kill you?

The risk from welding fumes is no secret. But the true extent of the danger they pose is less well known. Until now, perhaps.

New findings point to the fact that it’s not only welders themselves who are being exposed to welding fume, but everyone else working in the factory. This is regardless of the size of the business or the sector in question.

The study measured the air quality in a classic industrial company in manufacturing. It found that welding fumes can travel way beyond welding stations and get themselves into other parts of the workplace.

In such instances it’s unlikely that staff will be wearing protective equipment and there is typically no local exhaust ventilation (LEV), the standard precaution against welding fume.

They are produced when metals are heated above their melting point and contain a complex mixture of metal oxides as well as silicate and fluoride compounds. The exact composition depends on the individual welding method and the material being welded.

Welding fumes are particularly dangerous because the majority of particles they contain are less than 0.1 micrometres in size and classified as “ultrafine”.

Once inhaled ultrafine particles can penetrate dangerously deep into the lungs. They are so small they can also get into the bloodstream – enabling them to travel to other organs, such as the brain, where they can cause immense damage.

Welding fume can cause asthma and many other health conditions. According to the HSE, it is estimated that breathing metal fume at work leads to 40 - 50 welders each year being hospitalised. Manganese, which is present in mild steel welding fume, can cause neurological effects similar to Parkinson's disease. Meanwhile it is estimated that 152 of the UK’s 200,000 welders die each year from work-related cancer.

It was because of growing concern over welding fumes that, in 2019, the HSE decided to strengthen enforcement for all welding in any industry.

It cited new scientific evidence that exposure to mild steel welding fume can cause lung cancer and possibly kidney cancer.

“Regardless of duration,” it went on to say, “HSE will no longer accept any welding undertaken without any suitable exposure control measures in place, as there is no known level of safe exposure.”

About the new research

The welding air quality studies were carried out by Zehnder Clean Air Solutions, a company specialising in the supply of air filtration systems to industry.

It found pollution levels in the welding bays averaged 549 μg/m³, 10 times the amount of an inner city like London on a bad air pollution day.

Zehnder then measured the air quality in other parts of the factories and couldn’t believe what they were seeing.

“What we found was shocking,” says Zehnder’s Ben Simons, part of the team who carried out the study. “We were recording average levels that were twice as high as those at the welding stations themselves.”

Simons goes on to say: “You hear stories of welders cutting corners and not switching on their ventilation systems for a small job that won’t take long.

“In these studies, we’re not talking about this kind of situation, dangerous though it is. On the contrary, our findings reveal that toxic fumes produced at a welding station can find their way to other parts of the factory, even when the LEV is switched on.

“In other words, co-workers without any PPE could be unwittingly breathing in hazardous air pollution.”

Zehnder has coined a term for this phenomenon: “pedestrianism”. In a new whitepaper, the company explains it’s research methods in more detail, the dangers from welding fumes and what companies can do about them.

It also outlines HSE regulations designed to protect welders’ health. The HSE’s beefed up rules now state that if LEV on its own fails to control exposure, it must be supplemented by suitable respiratory protective equipment (RPE) to protect against residual welding fume. RPE must also be provided for outdoor welding, where LEV will not work.

But what about the pedestrians identified in the new research? Are the regulations enough to protect them too? That question is one for employers and health and safety managers to think about. But if Zehnder’s findings are anything to go by, surely the answer is “No”.