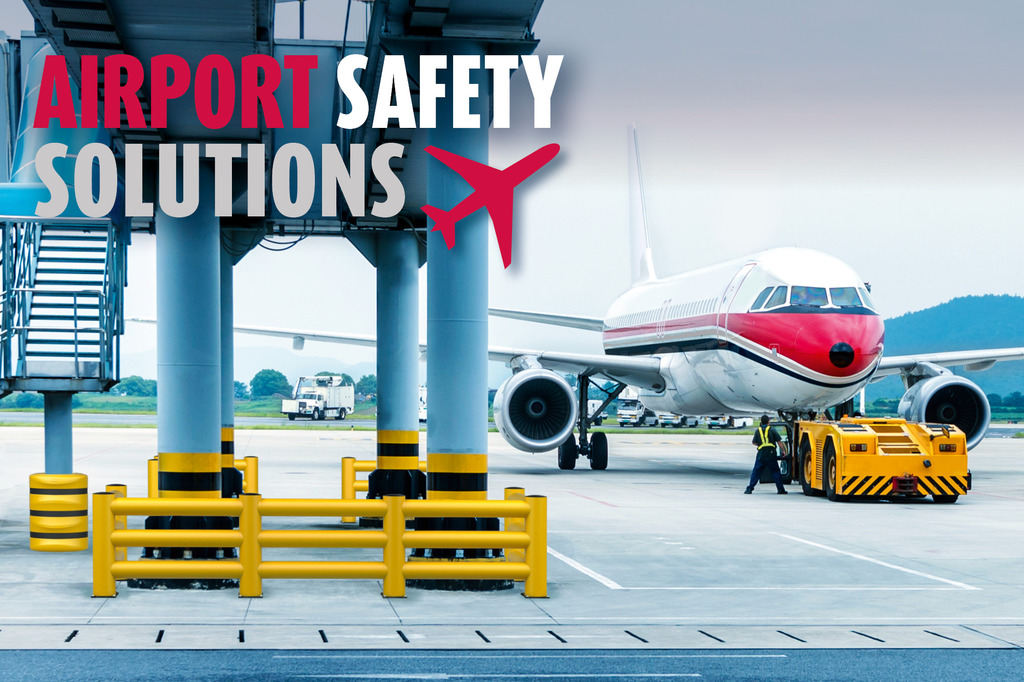 Airports make intensive use of collision protection. There are an enormous number of things that can go wrong at an airport – with potentially dramatic consequences for travellers or employees, and that´s why nothing is left to chance. Here, Boplan UK outlines its most important types of collision protection and how they can be deployed specifically in airports.

The first three places are all closely interrelated. If irregularities occur in any one of these places, the others will also experience difficulties as a result. Even the slightest incidents can cause a significant amount of bother. These are places where you as an organisation do not want to take any risks.

This means that you can use this type of collision protection in virtually every zone within an airport in order to maximise safety. Besides the airliners, there are also many other vehicles on the tarmac, a classic example being the baggage trains pulling a row of carts. Forklift trucks are also occasionally used for activities or the transport of goods. In order to prevent such vehicles from causing damage to walls, partitions or installations, the TB Super Double or Triple can be installed at vulnerable points.

Large numbers of baggage carts are encountered in the baggage handling zone. Handlers are busy loading and unloading bags under extreme time pressure, a virtual recipe for accidents that will damage the building or installations with conveyor belts. Installing a TB Super Double in places where these vehicles come close to such installations, can help avoid huge repair costs and save travellers from the nightmare where transport of their bags to their holiday destination is delayed.

Visitors feel a good deal of pressure to check in long in advance, something that has become quite a challenge ever since the augmented security measures were introduced. Minor accidents in the car park can thus easily occur. For travellers, nothing is more irritating than having to report car damage to their insurance company when they were already in a hurry. The TB Super Double helps avoid that drama as, although it is a strong structure, the equipment is largely composed of plastic, so you not only protect the infrastructure, but also limit the chances of serious damage to the car.

The TB 400 Double and TB 400 Double Plus are lighter variants of the TB Super models. In zones where at most light forklift trucks are used, it suffices to install this type of collision protection. For even lighter types of vehicles such as pallet jacks, the TB 400 Plus is an alternative. For example, it can be effectively deployed in terminals, where you want to avoid a collision from occurring with expensive moving walkways.

Sometimes it suffices to mark out a particular zone with protective bollards. This can involve a purely visual delimitation, but equally e.g. protecting walls or passages against collisions. A specific example of this is the installation of a bollard near the corners of a passageway. This forces vehicles to keep within the available space. If someone makes a mistake while driving, the bollards will absorb the impact.

You can apply this type of collision protection in every zone of an airport: from the car park to the tarmac. It can prove its usefulness everywhere.

In extensive complexes such as airports, pillars constitute a large part of the infrastructure. They are vitally important for supporting the structure, so it goes without saying that you should want to protect them adequately.

Each building has its own type of pillar: from wide and round to rectangular and narrower. Boplan offers appropriate collision protection for every type of pillar. For example, with the KP Protector you can protect round supporting pillars or columns with an I-beam. These extremely impact-resistant protection products are said to look good and won an iF Design Award.

You find pillars in virtually each covered section of the airport, but you can also use them on open spaces, such as the car park. In particular this collision protection can also be easily installed around lampposts. Just like the other collision protection products, the KP Protector offers double protection. They absorb the impact of a collision and their striking yellow colour helps to alert drivers and prevent collisions altogether.

For pillars of unusual dimensions, the KP Universal has a modular fence-like structure. It can be fitted easily around every type of pillar or (broadcasting) tower.

Passageways where transpallets or cleaning trucks go through on a daily basis are vulnerable to being damaged at their corners. Along with deploying protective bollards along the sides of the passageway, you can also install corner protection.

Above all in the baggage area, corners damaged due to collisions are a frequent problem. Employees are under unremitting time pressure, which makes the likelihood of such accidents that much higher.

Protecting meters-long walls and partitions against collisions is an easy intervention by installing safety boards. For example, the Hexa is composed of an impact-resistant board that absorbs impacts low to the ground. Besides protecting against wall damage, this board can also be used as a physical boundary between stacked goods, or as a wheel guide or stopper.

New to Boplan's protective boards line is the FLIP. This is a polymer safety board whose connecting pieces enable you to efficiently demarcate an area.

Safety boards can be used in virtually every zone of an airport, from baggage processing to the car park. In the car park you can combine this with the WS Wheel Stop. With this rubber wheel stopper you prevent vehicles from going over the edge of a parking space and touching another vehicle or a wall.

Ground markings can also increase safety in the sense that they are visual indicators that draw attention to points of attention or high-risk zones. Only in combination with physical protection can ground markings assure a safe environment, so don´t rely on ground markings alone, unless they are applied in a zone that is otherwise risk-free. In Boplan's Line Plan range you will find ground markings with various motifs and colours. For example, ground markings could be used as a line plan in terminals, in order to lead travellers to the right gate, or to mark out a zone where a waiting line for the gate can form.

Plastic collision protection stands up to all weather conditions, and can be applied in very cold zones (such as refrigeration systems) or hot zones. So you can install every type both indoors and out. Unlike steel collision protection, the polymer of which our products are made is not subject to oxidation.

Moreover, plastic bends on impact. Boplan UK says not only do you limit the risk of collisions, the chance of damaging the vehicle that comes into contact with it will be limited or even non-existent (depending on the force of the impact). Afterwards the collision protection reassumes its original form, so does not have to be replaced.